Asia… it’s our 6th trip there! 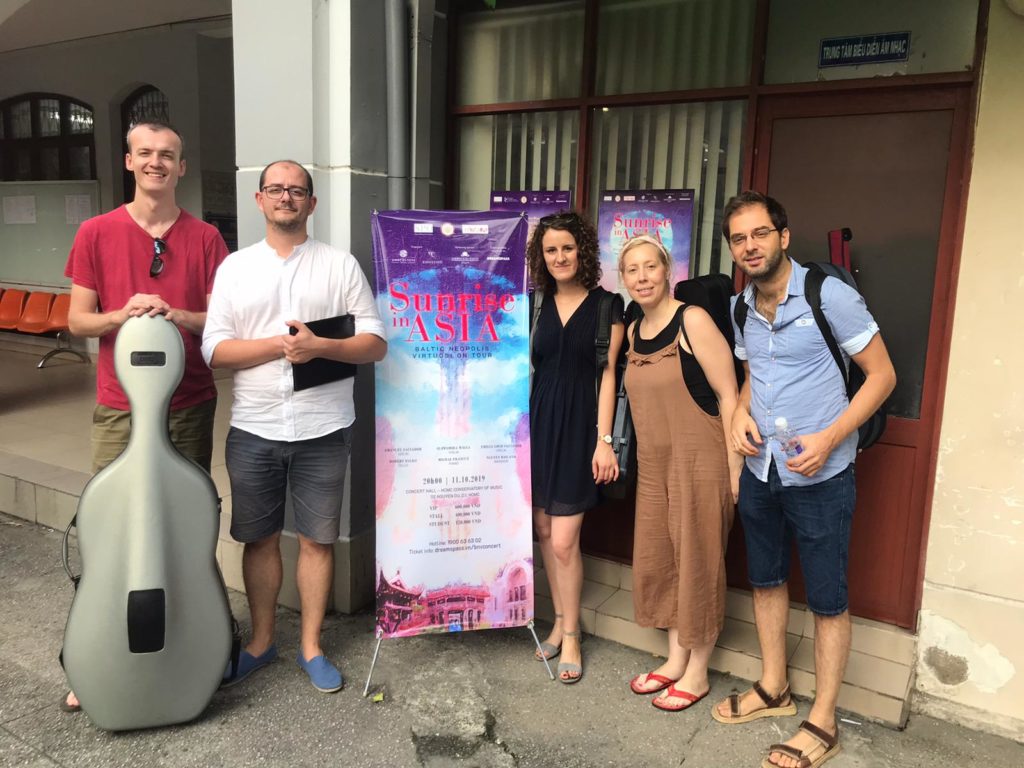 Organizing a concert tour in Asia is certainly a big challenge. However, over the years the Baltic Neopolis Orchestra has already gained experience and as soon as the chance to perform in the Far East appeared, without hesitation, it decided to set off in October to India and Vietnam. They brought snail masks, exotic fruits, but above all the power of impressions and memories that came from meetings with a completely unknown audience. Immediately after the concert in Szczecin, on October 6, the musicians of the Baltic Neopolis Orchestra began their journey. The composition of Baltic Neopolis Virtuosi included: Emanuel Salvador, Sławomir Wilga, Emilia Goch Salvador, Robert Dacko and Michał Francuz, accompanied by Paulina Wittig from the orchestra’s office and little Leonardo Goch Salvador, who by the way celebrated his first birthday in Mumbai. Three concerts are planned, in Mumbai, India, as well as Ho Chi Minh and Hanoi in Vietnam. Time is short, and the concert program is extensive and 24,000. kilometers to go! Invitations of prestigious institutions and excellent musicians, as well as the expectations of the audience, which has not yet had the opportunity to come into contact with Polish music, gave good mobilization. First, the National Center of Performing Arts, the most important cultural center in India. Contact with Hindu culture and the local climate has made a great impression on us, despite the fact that for some it was not the first time in this country – says Emilia Goch Salvador. Feria of colors and smells, high architecture near the river, reminiscent of New York could not but arouse emotions. Similarly, meetings with the audience. The listeners were probably as excited as we were! It was for them that the musicians played the “Quartet in D minor: Stanisław Moniuszko,” Orava “by Wojciech Kilar,
“Overture” by Mikołaj Górecki, as well as “Piano Concerto in E minor” by Fryderyk Chopin. There was also a composition specially prepared for this tour – the Vietnamese song Phuca Linh “Sunrise in Asia”. The musicians recall the atmosphere of many places visited in India, but they particularly emphasize the warmth and hospitality with which they met. – The heat flowing from these modest living people was really encouraging and definitely a great predictor of the further route. – adds Goch
Salvador. Two concerts are planned in Vietnam in Ho Chi Minh and Hanoi, however, the initiator of the arrival of musicians from Poland was bassoonist Nguyen Bao Anh, director of the Ho Chi Minh City Conservatory of Music, as well as the Saigon Philharmonic Orchestra and the Hong Kong Bassoon Academy. The program made in India was enriched with the work of Johann Brandel “Quintet in F major, Op. 13 “, which the musicians performed with the host of the place. The second concert was organized by the Polish Embassy in Hanoi; At the invitation of the Baltic Neopolis Ambassador, Virtuosi played in the Vietnam National Academy of Music Hall. – Nothing surprised us in Vietnam as much as the difference between the cities we were able to visit. – says Emilia Goch Salvador. – Ho Chi Minh and Hanoi are absolutely incomparable. We are glad that we could spend more time in Ho Chi Minh, a modern, multi-colored city, surprising at every turn. Maybe we liked it because we flew to him from India through Hong Kong (!) And breathed a sigh after traveling there (laughs). In Hanoi, in turn, we had
I am already aware of the imminent departure, and of course rehearsals for the next project that were already waiting for us in Szczecin. This year’s Baltic Neopolis Orchestra tour in Asia certainly was not and will not be the last. It was achieved thanks to the huge commitment of partners in India and Vietnam, as well as the support of the Adam Mickiewicz Institute and patrons of the orchestra: the City of Szczecin and the Szczecin and Świnoujście Seaports Authority. In addition to prestige, as well as new artistic experience, musicians from Szczecin managed to establish lasting cooperation with artists from the Far East. Talks about the future project are already very advanced, so you only have to wait for official news about the next BNO tour in Asia, promoting Polish music and Szczecin in very distant countries.